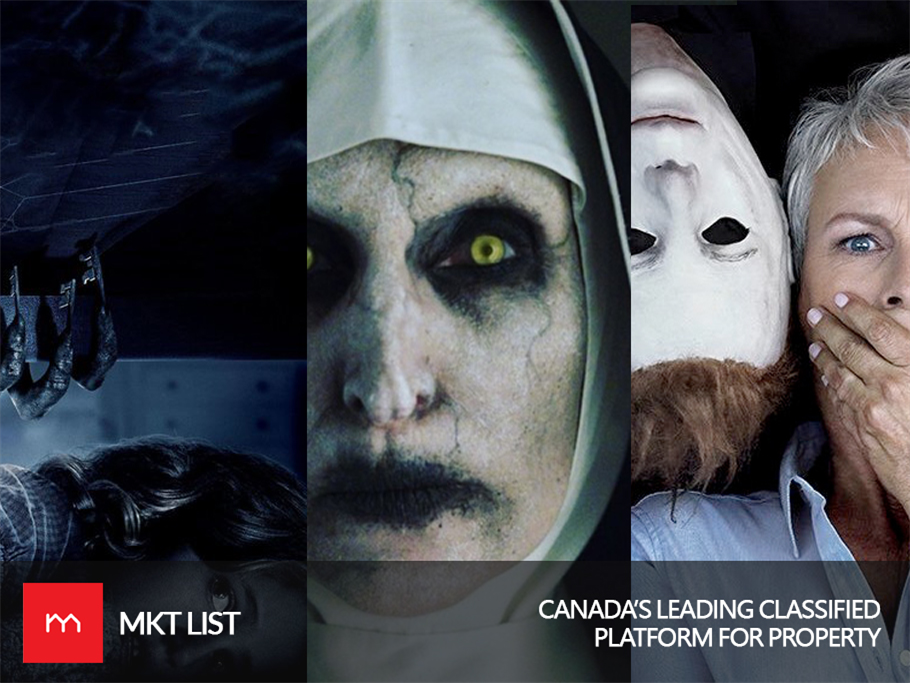 ‘Cause this is thriller, Thriller night. The genres of movie I like most after ‘action & suspense’ are ‘horror’ and ‘thriller’ and I am pleased to announce that 2018 is another big year for such movies. *yay-yay*.  After a long gap of 15 years, a horror movie finally made its pace in the list of highest-grossing movies. Well, TBH I didn’t like IT much, sort of a stupid story *duh* with its sequel on a line. Not only IT but other movies too succeeded in gaining awards in 2017, included in it Get Out, Happy Death Day, Annabelle: Creation, Raw, and It Comes at Night.

Well, let’s see if 2018’s horror movies will be able to carry on the same phenomenon of 2017. The potential of the movies and storyline is telling they’ll bang the box office. Here are some most awaited and must-watch movies of 2018 as this year is considered to be the year of movies. Expected to be released on Feb 2nd and inspired by true events. Winchester is a story of a legal heiress of Winchester Gun Manufacturer, Sarah Winchester (Helen Mirren). After the death of her husband and daughter, she feels herself being surrounded by strange spirits. Legend says that those spirits are of people died by the guns of Winchester Gun Manufacturing company. In order to keep herself away from the spirits, she has to build a house to keep them in it. The house has hundreds of room and staircase leading to nowhere. The house is a mean of tourist attraction and believes to be haunted and cursed. The Spierig brothers have directed and written the movie. Jason Clarke also appears as Dr. Eric Price. The sequel of 2008 Strangers, this is going to be released on 9th March. The movie has the same storyline as the first movie. Three psychopaths with masking on their face terrorize and frighten peoples. In this movie, a family is a victim of these three lunatics. The family is on a road trip when they accidentally take a path which leads them to a park being weirdly isolated and here come the three maniacs. The prominent actors are Christina Hendricks, Bailee Madison, and Martin Henderson. The former director of the first part has been replaced by Johannes Roberts who is the man behind 2017’s 47 Meters Down. The movie revolves around a family living on a farm silently. They remain quiet for all the time. The mysterious and awkward silence envelops the whole movie. The idea behind keeping the mouth shut is that if they utter a word, the strange spirit or threat would attack them and kill them. If the family wants to be safe and sound, they must not talk and stay quiet. Otherwise, the spirits would hunt them till death. The first movie of the Paramount pictures to be appeared on the screens on April 6th with John Krasinski and Emily Blunt as a leading character in the movie. John himself has directed the movie for the first time in which he too is starring. The trailer shows that the movie has got some potential. The Sci-Fic movie wraps up with some horror in it is going to be released soon this year on April 20th. It is a sequel to Cloverfield movies somehow. The title might be changed in accordance with the Cloverfield but until then the name is God Particle.  The story of five astronauts who after the disappearance of the Earth has been stuck in the space. They come across horrible discovery and to combat it, the crew must stay rouse and fight against it. The leading characters are Daniel Brühl, Elizabeth Debicki, Gugu Mbatha-Raw, Chris O’Dowd, John Ortiz, and David Oyelowo and directed by Julius Onah. Another Paramount Picture hoping to keep its pace exactly same as the previous entries of the movie. Blumhouse Productions has quickly taken steps to success with their production of the movies like The Purge, Sinister, Paranormal Activity etc. This year on April 27th, Truth or Dare is going to be released with a big bang as the trailer predicts. The movie revolves around a group of teenagers forced to play the supernatural version of the so-called game Truth or Dare. The game keeps becoming intense and violent as the movie proceeds. The film is going to be hit one, as all the Blumhouse movies are always something that we cannot resist ourselves from watching them. It is the same slasher and thrill movie as the 2017’s Happy Death Day, from the same production company. The film looks creepy rather horror from the trailer. The movie starts when the four girls try to quash the myth of a small town where they live; a thin, slender, tall, horrifying character known as Slender man who compels young people to kill others for him, as the inhabitants of the area believe. The terror strikes more loudly when one of the girls goes missing. The myth seems to be true when two girls living somewhere in the US stabs their classmate 19 times as directed by the slender man. The movie from the studio of Sony Pictures is expected to be released on May 18th. This is the most-est awaited movie for me. The fourth prequel of The Purge series. Though the third installment of the series seemed to be the last one, audience appears to hanker for it more. This Purge has been set up on the Staten Island and the idea behind staying on the island on the Purge night, as per James DeMonaco says, is that people are gaining rewards for participating in the night in shape of money, which means, nobody is going to leave the island on that night. James is not a director of this prequel and the saddest part is that Frank Grillo is not acting in the movie. The film soon hit the theaters with a bang, of course, on July 4th. The movie is connected with the Conjuring 2 and is the fifth installment in the Conjuring series. The related with a tragic death of a young Nun in Romania. The Vatican investigations then send a priest and novitiate along with people to dig the root cause of her death. They find themselves in a big trouble and terror when a demonic spirit surrounds them in a face of the Nun. The film has some potential like the Annabelle making it worthful on the screens. The movie soon hits the theaters on July 13th with leading actress Bonnie Aarons. On August 10th Jason Statham will be showing his masterful acts in The Meg. The movie is based on the book by Steve Alten with its mysteriously thrilling power to grab the audience. From the genre of thriller and mystery and after 47 Meters Down, this will be a wonderful treat for the people who love thriller and mystery. Jonas Taylor (Jason Statham) is a Naval Captain who is sent to rescue a crew on a deep-sea submersible to protect them from the threatening and dangerous megalodon shark, which is a rare species now, in the Pacific Ocean. The movie becomes all the way worth-watching when it has leading actor Jason Statham. *wink* On a Halloween night, when a seasonal horror theme park is open to let people enjoy the festive, a person wearing a costume of a killer start killing people in the crowd. The people don’t suspect the killing and to their imagination, it is all a part of the show and his actions are supporting his costume and appearance. From the director of Paranormal Activity: The Ghost Dimension, Gregory Plotkin, the movie soon makes its first appearance on the screens on October 12th. Though the Paranormal Activity wasn’t as people expected it to be, hopes and wishes are for this movie to be a thrilling one and worthy of people’s viewing. Another slasher movie with the executive producer John Carpenter and the studio that made Sinister, Paranormal Activity, and Insidious. Halloween will be banging the screens on October 19th. The eleventh installment of the Halloween franchise. The movie is plotting the same storyline as the previous one. In this part, Jamie Lee Curtis is portraying the character of Laurie Strode. After surviving the initial massacre and annihilation approx. for forty years, Laurie is again step up to fight with the serial killer Michael Myers. This movie will be having a hard time competing with Halloween. The production companies behind it are Paramount Pictures and Bad Robot Productions. Another gripping thriller is on its way to hit the screens on October 26th. The story of a World War II in which two American Paratroopers land on the Normandy region to carry out their mission but they soon find out that the Nazis are having something other than the usual military operation; which is nothing but the supernatural forces. The movie, though not much horror, but it could be a fun-watching. The movie, from the studio of A24, is going to be released sometime in 2018 as the actual date is not confirmed. The movie has some good cast and crew including Chance the Rapper, Zazie Beetz, Joe Keery and Paul Scheer. The movie is not something that makes you a hell of terrified, as per a few clips, but it is a combo of horror and comedy (if comedy is included, I wouldn’t be the one watching this *duh*). The story of a pizza boy who gets murdered by a killer and the whole city runs to find the actual murderer. Sounds boring, but I am sure for some people it will be a must-watch.

So, get yourself ready as this year is bringing with itself the biggest terror, horror, and thriller of all time. Chillax, I am talking about the movies. *ha-ha* Happy thunder filled movie nights!