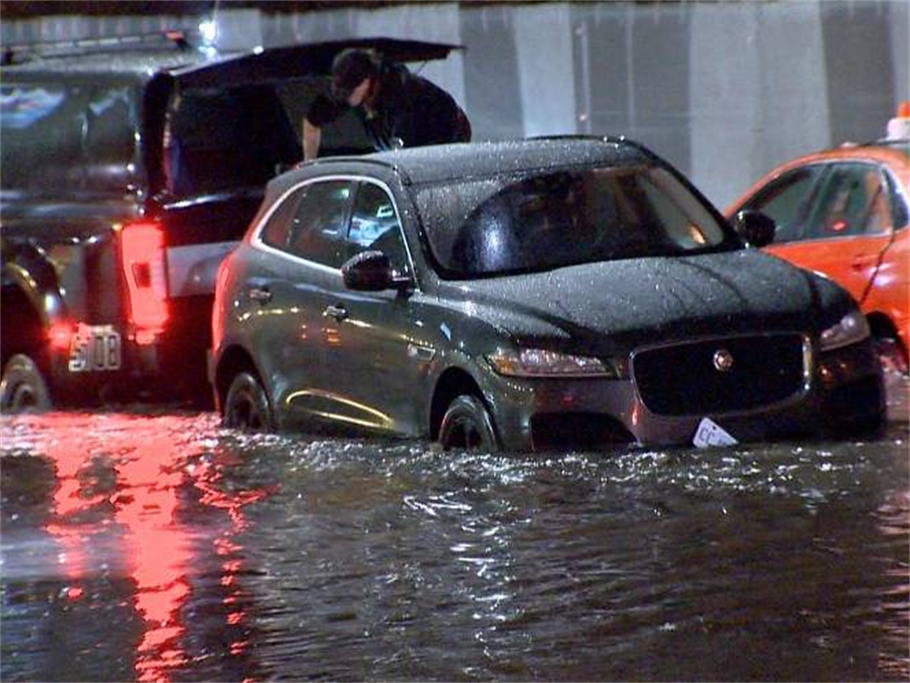 Severe thunderstorms that have caused flooding and power outages around the city Monday will likely exceed 100 mm of total rainfall before it tapers off later this evening, according to Environment Canada.

The amount of rainfall has beaten the previous same-day rainfall record of 29.2 mm in 2008 and overcome the roughly 70 mm monthly average for July.

The thunderstorms are over the Mississauga and Brampton regions and moving slowly eastward toward Markham, Richmond Hill and Toronto.

They added that crews are out and evaluating the damage.

Powerstream said all power has been restored for Markham, Richmond Hill and parts of Vaughan after a loss of supply from Hydro One’s transformer station in Buttonville. They said that power was restored shortly after 10 p.m.

Due to severe flooding there is no TTC service at Downsview to St. Clair West, St. Andrew to Bloor, Lawrence to Finch, Jane to Kipling, and the Sheppard Line.

The Toronto Region Conservation Authority also warned that the banks of the Don River were at risk of collapse in the area of Hoggs Hollow in the area of Yonge St. and York Mills.

The TTC has stopped all subways due to signal and power issues throughout the city. Parts of Union Station have been sandbagged in order to stem the flow of water.

TTC Chair Karen Stintz said they have asked Hydro One to consider TTC a priority in regards to restoring power. She said it is hard to determine how many people are trapped underground on the subway system.

“This is a historic night of Toronto weather,” Stintz said.

Metrolinx said buses and trains have been affected due to severe rain throughout Greater Toronto and Hamilton area.

A portion of the track west of Long Branch is completely under water, which is making it difficult to operate GO trains along the Lakeshore West line.

A GO train is also partially submerged on the Richmond Hill line that left Union around rush hour. The murky brown water, which spilled through the bottom floor of the train and left roughly 1000 passengers stuck for more than three hours.

Toronto police’s Marine Unit has arrived on scene and they are evacuating passengers, starting with those who have medical issues. Roughly half of the people have been rescued from the train.

All flights at Billy Bishop Airport have now been suspended due to the storm, according to Pamela McDonald, spokeswoman for the Toronto Port Authority.

The ferry service has been suspended for passengers travelling to the airport, but arriving passengers are being transported.

Dozens of flights have also been delayed at Pearson.

The Don Valley Parkway is closed northbound and southbound from the Gardiner to Bayview and Bloor due to flooding.

Toronto police said significant rainfall has caused the banks of the Don River to overflow. They are urging people to stay at home if they can.

Toronto police and Toronto Fire have said there have been no injuries due to the storm. Toronto Fire also said that they received around 300 stacked calls in regards to the rain.

Toronto EMS are recommending people do not travel if they can as cars are creating obstacles for paramedics. They also said they have received a large number of people stuck in elevators.

The Toronto Region Conservation Authority also warned that the banks of the Don River were at risk of collapse in the area of Hoggs Hollow in the area of Yonge St. and York Mills.

Yorkdale and Sherway Gardens are both closed due to power failures.

Toronto’s Fringe Festival has also cancelled their performances tonight. They tweeted that the “priority is artist, staff and audience safety.”

Earlier Monday afternoon, Environment Canada issued two special weather statements — one for thunderstorms over southern Ontario and the other for local heavy downpours.

Environment Canada also recommends drivers avoid going through water on roads as even shallow fast moving water can sweep a vehicle away.