Toronto Attack: Gunman Dressed in Black when He Started Firing in a Restaurant! (Video Inside) 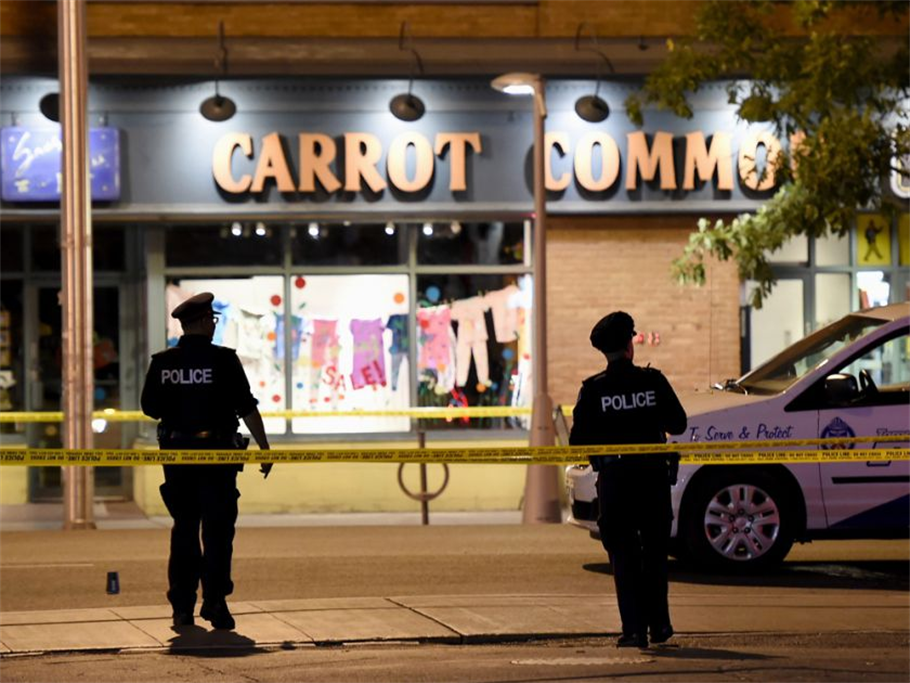 The brutal attack by a Gunman near Toronto neighborhood, dressed in black, killed a young woman and left 13 injured when he started firing bullets into restaurants and cafes.

The youngest of all, a nine years old little girl needs prayers as she is fighting for her life in a hospital. The gunman also shot to death by police.

Witnesses of the attack are in extreme horror and chaos as they confirmed around 20 to 30 gunshot sounds, leaving their summer night all exploited.

The footage revealed the gunman’s black clothes which he was wearing at that time with a black hat. He had a bag hanging from his shoulder as he started nonstop firing at the storefront from the pavement.

Police has no idea what was the reason of it all and is failed to stop terrorism.

The people, eyewitnesses of the attack, are really terrified as they talked about the gunman and his firing at the city block in Danforth Avenue.

The worker of the Caffe Demetre dessert restaurant, Diana, told local TV station CP24 that she was serving a family of four people when suddenly the firing started before her eyes, leaving a little girl of the family wounded.

As the girl was sitting near the front side of the restaurant so, when the shooting started, she fell down on the floor leaving her mom all teared up.

Diana said the gunman looked as if he had willingness to kill people as he stood at the patio of the restaurant before firing three shots and then people began to scream and cry.

She ran towards the back of the restaurant horrified and hid in the basement. After some time, she came out at the site of attack.

Diana said: “When I came upstairs I saw the little girl on the floor. Her mom was crying. I’m really worried about that little girl because she just started her life."

A man told how he came within about 10-15ft of the shooter, adding: "He had this horrible look in his face, like he was under the influence or something.”

“I fell down. He kept shooting and ran down the street.”

Andrew Van Eek, a resident of the area, said he emerged his head from the window with a sound of gunfire and stuck to see that the street was full of roar and scream.

He told CBC News: "I saw somebody come just down the sidewalk and shoot into Demetre restaurant."

Jessica Young, a worker of Second Cup coffee shop, told the Toronto Star: “I look to my side and see the shooter through the window. He sees me, or he sees my co-worker or someone, and points the gun and shoots through the window."

Bartender Andreas Papadopoulos’s colleague at the Greek restaurant Mezes got his hand gunshot by the attacker before he could be saved inside the restaurant, according to the New York Times.

The area seemed chaotic as they tried to hide in the restaurants and bars and walked here and there on the streets in search of a safe place.

Some witnesses saw people lying on the floor of Mezes restaurant but whether they were injured or covered up remained unclear.

Others said they took the sound of gunshot as of firecrackers initially, before it was confirmed.

Observers told the gunman reloaded his gun many times as the sound of silence could be felt at the moments to moments between the gunshots.

Jody Steinhauer told the CBC News that she and other customers at Christina’s restaurant had to hide at the backside as the sound of gunfire began.

She told it sounded like 10 to 15 firecrackers, adding: "We started to hear people scream out front."

The gunman also shot to dead during a shootout with police with no harm to the officers. But to suspect about the death of the gunman as to be killed by the police or by self-inflicting act, is unclear.

Toronto Police Chief Mark Saunders said, "We are looking at all possible motives... and not closing any doors."

City Councillor Paula Fletcher, who represents the Danforth ward, told that the attack was not related to gang-shot as the gunman looked “very disturbed”.

The incident happened one week before the annual Greek food and music festival in Greektown, Taste of the Danforth, which would have attracted one million people over three days.

Mayor John Tory asked people to stop calling it as “despicable" and "cowardly" act and stop making any conclusion and wait until the police investigation has been done.

It was the second time the mass attack has been done in Toronto in 2018.

In April, ten people were bleed to death when a driver intentionally ran a van over the pedestrians in north Toronto neighborhood.