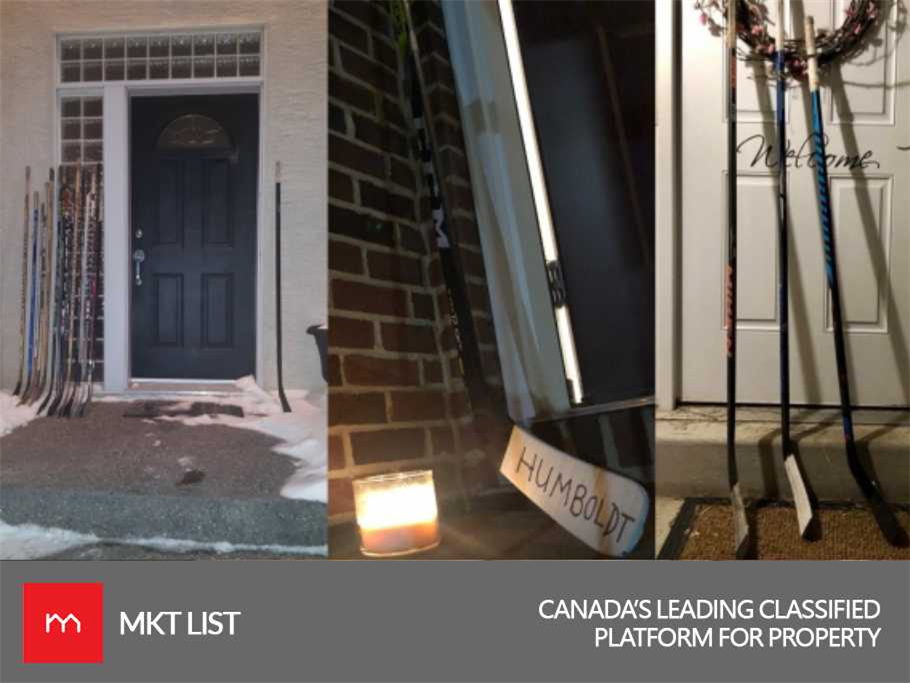 Canadians support the victims of Humboldt Broncos bus crash accident putting 15 innocent people to death. For their honor and for the tribute, they are leaving hockey sticks on their front porch, showing they are with the grieved family in this sad time.

The accident took place on Friday when the team was going for the semifinal game against Nipawin Hawks, the bus suddenly stuck with the semi-truck, brutally killing 17 people and more than 14 injured, near Tisdale, Sask.

On Sunday, many people gathered in the Elgar Peterson Arena in Humboldt to attend the vigil in the memory of the lost people.

Not only that, residents of the city from outside the specific community also shared the grievances with the death victims by sharing photos of hockey sticks at their front porch on social platforms in the support of the Broncos team.

Related: A Sudden Wave of Despair Pass Across the Globe after the Humboldt Broncos Bus Crash!

The first tribute was paid by the Winnipeg Jets broadcaster and Humboldt native, Brian Munz, with a picture of the hockey stick on the porch, on the Twitter saying that he got it from his friend from Humboldt when he went there for high schooling.

He uploaded a photo of a lonely hockey stick standing in support of the wall, attached with the following words:

“Leaving it out on the porch tonight. The boys might need it … wherever they are,” reads the text message.

“Inviting you to do the same as we remember and send our thoughts to the #HumboldtBroncos,” Munz also said.

Just like Munz, many people are continuing with the same pace as that of Munz by leaving hockey stick at their front porch to show sympathies towards Humboldt and the Broncos team.

“Leaving our sticks on the front porch with lights on in honor of hockey families and friends of #HumboldtBroncos Canada Mourns with you,” Greg Burgess tweeted.

“We are all Broncos in memory of those who lost their lives and continue to fight for their lives we put our sticks outside under the lights to remember you #HumboldtBroncos #putyoursticksout #WeAreAllBroncos,” Vicki Sweet tweeted.

Expats of China connected with the tribute through a hashtag #putyoursticksout and people from all over the world also joined it.

The dead people are Broncos captain Logan Schatz along with nine other players, coaches Darcy Haugun and Mark Cross, the team’s statistician, radio play-by-play announcer and the driver of the bus.