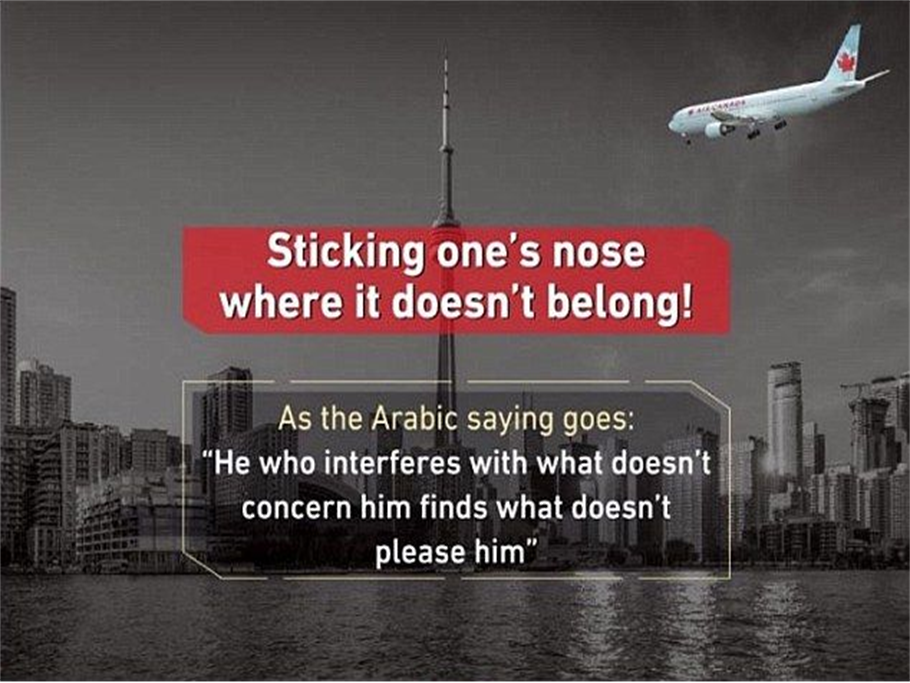 In what appeared to be a further sign of fading relations between Canada and Saudia, a verified Twitter account, which is reportedly linked to Saudi authorities, shared an image of a plane flying towards Toronto's CN Tower.

The image was overlaid with text, including a quote which read "he who with what doesn't concern him finds what doesn't please him".

People on social media have been quick to point out the similarities between the image and images of 9/11.

Who is being held?

Last Tuesday, the Office of the UN High Commissioner for Human Rights said at least 15 human rights activists and women's rights activists critical of the Saudi government had been arrested or imprisoned subjectively since 15 May.

Eight of them are believed to have been released pending "procedural reviews", but the situation of several others are unknown.

Several of those held have been suspect of serious crimes, including "suspicious contact with foreign parties", and could face up to 20 years in prison.

Ms Badawi was given the US International Women of Courage Award in 2012 and is known for challenging Saudi Arabia's male guardianship system.

Her brother Raif was sentenced to 10 years in prison and 1,000 lashes for "insulting Islam" back in 2014, while his wife, Ensaf Haidar, lives in Canada and recently became a Canadian citizen.

What did Canada say?

Foreign Minister Chrystia Freeland wrote on Twitter on Thursday that she was "very alarmed" to learn that Ms Badawi had been detained.

The next day, the Canadian foreign ministry called for the activist's "immediate release".

How did Saudi Arabia react?

The Saudi foreign ministry statement expressed "disbelief [at] this negative unfounded comment which was not based [on] any accurate or true information".

It claimed the activists were being detained lawfully and that the Canadian statements represented "blatant interference in the kingdom's domestic affairs".

The ministry recalled its ambassador to Canada for consultations and declared the Canadian ambassador persona non grata, giving him 24 hours to leave.

Saudi Arabia would also "put on hold all new business and investment transactions with Canada while retaining its right to take further action", it said. Trade between the two countries was worth $3bn (£2.3bn) in 2016.

All scholarships enabling Saudi students to study in Canada were also suspended, while students already in the country will be relocated.

It is unclear how many people this will affect. The Vancouver Sun said in 2015 that about 5,000 new students arrive from Saudi Arabia each year.